March rolled in cold and snowy and not too friendly; we usually have real signs of spring by now but it’s slow in coming this year. I have zero interest in winter sports or cold weather, so I sort of survive the winters waiting for the light to return and some warmth and color to appear.

Sadly, I have to give up my outside painting studio after this month. It’ll be all right; the light is actually better in my home, and I can rearrange the space to work. It’s just nice to have a dedicated place (and a real utility sink). I hope the outcome will be more work, since it’ll be right there waiting for me on insomniac nights.

A couple of odds and ends:

Last summer I saw a wonderful exhibition of Japanese kites, some quite old. There was one with a sort of turnip pattern that I loved. I’ve been trying that pattern in some small watercolors:

I discovered the concept of asemic writing through Michael Jacobson’s blog The New Post-Literate: A Gallery of Asemic Writing (there is also a Facebook group). Exploring what Jacobson calls “the new post-literate culture,” asemic writing refers to marks and symbols that look to us like writing – literacy – but don’t translate to a known language. The art that’s emerging is beautiful and wide-ranging, from marks of calligraphic fluidity to bold, aggressive patterning reminiscent of graffiti more than calligraphy.

I had a stack of small cards with watercolor washes in my studio and added some experimental    asemic marks. 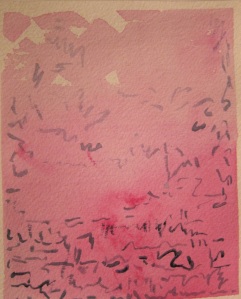 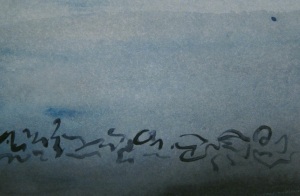 I think I lean toward the calligraphic/pretty (I studied calligraphy as a kid) but a more gutteral “language” would be good to explore.

That said, as a writer, I don’t know what a think about a post-literate culture. Literacy still matters. 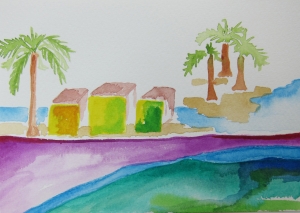